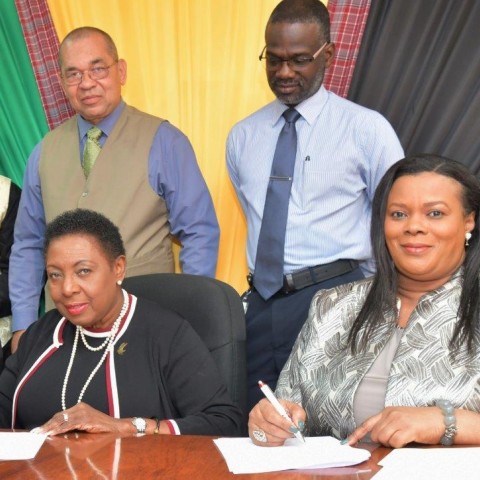 In addition to the top ten finalists selected at the recently held semi-final concert, the 2019 Jamaica Festival Song Competition will see two additional finalists being added to the lineup as ‘Wild Cards’ as announced by Minister of Culture, Gender, Entertainment and Sport (MCGES), the Hon. Olivia Grange at the competition’s contract signing at the Ministry on Wednesday, May 1.

The official gathering, which was also attended by the Chairman for the Jamaica Festival Song Organizing Committee, Orville Hill, the Interim Executive Director of the Jamaica Cultural Development Commission (JCDC), Daffodil Thompson, the Director of Marketing and Public Relations at the JCDC, Andrew Clunis and the Permanent Secretary in the Ministry of Culture, Gender, Entertainment and Sport, Denzil Thorpe, saw the Festival Song finalists being briefed on the terms of the competition as well as signing a contract with the JCDC stipulating the guidelines of their participation.

“Every year we try to find new ways to make the competition bigger and even better and so we have decided to do something new this year. We are introducing two wild card finalists who will add some additional flavor to both our island-wide road show and the final night’s line up,” Minister Grange said as she gave her charge to the finalists, emphasizing that the road tour will visit every parish in the island.

“And as we strive for the continued improvement of this competition I would like to remind you of your responsibility to use this platform and your message to bolster pride in our likkle but talawah nation,” Minister Grange continued.

“The committee, having looked at certain parameters relating to the competition, decided that the additional quality of this year’s entries warranted two additional finalists being added to the lineup.

“Also we have had experiences in previous year with some finalists not being able to make it to some of the road shows or to the final night and therefore we wanted to expand the number of finalists by including these two wild cards so that the competition can have a more robust performance lineup,” Hill said.

Deisel and Lord, who both hail from the parish of St. Mary and were semi-finalists in this year’s competition, will now join the other ten finalists equally throughout the remainder the competition.

The other finalists are: Nickoy Green of Manchester, Raldene Dyer of St. Ann, Jerome Smith of St. Elizabeth, Nester Chung of St. James and Jason Wright of St. Thomas.  Representing St. Catherine are Alero Perrier, Vernon Smith and Mackedah Henry, while Kingston will be represented by Edwin Myers and the Escarpment Road New Testament Church of God Choir.

In Addition to signing their contracts with the JCDC, the finalists also gave a brief performance of their winning songs.

The Jamaica Festival Song Competition is one of the longest running original song competitions in Jamaica and continues to unearth and showcase several talented individuals each year. A signature programme of the JCDC, an Agency of the Ministry of Culture, Gender, Entertainment and Sport, this competition, which started in 1966, continues to serve as a musical platform for cultural exposition and for entrants to make an indelible mark on Jamaica and the world. The competition boasts past winners like Toots and the Maytals, Desmond Decker, Eric Donaldson, Roy Rayon and Stanley Beckford.