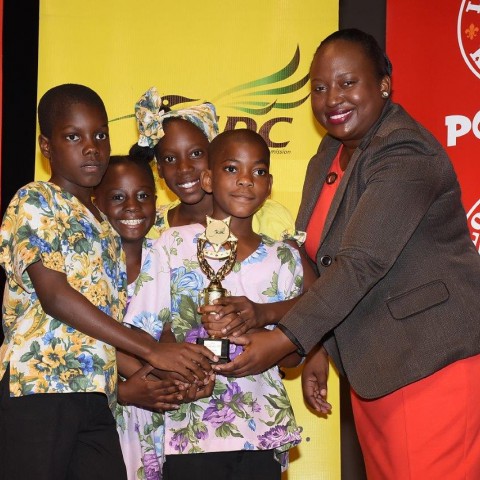 Kingston, Jamaica: Participants of all ages showed up in their brightly coloured costumes to the Little Theatre in Kingston from across the island to put their talents on display for the National Finals in Traditional Folk Forms on Tuesday, April 2 and Wednesday, April 3.

The two day festival officially started the National Finals round of the 2019 National Festival of the Performing Arts, which will continue at the Little Theatre until Wednesday, May 1 and also cover finals in the performing arts areas of Drama, Speech, Music and Dance.

The cream of the crop finalists competed for national honours in Traditional Folk Form categories such as  Dinki Mini, Gerreh, Ettu, Ring Games and both Quadrille Contra Style and Camp Style, among others.

“This year we saw over 600 entries, 103 of which went on to national finals. In fact, we've seen entries that we had not anticipated at all.” said Lenneth Richards, Traditional Folk Form Development Specialist at the JCDC.

“Kidz Palace Nursery entered the competition with an Ettu item in the Class One category, which is for students six years and under and they even went on to compete at national finals. Class Ones, typically don't partake in traditional folk forms like Ettu, let alone score major points in national finals. It's a good look,” Richards continued.

Richards went on to speak on Traditional Folk Forms’ relevance to Jamaican culture as a whole, seeing as these forms continue to “inform popular dance and culture” to this day.

“Many times you will see a so-called new dance or trend in Jamaican pop culture, but the truth is many of these things are echoes from our past. Because Trad Folk is so ingrained in our culture, many children who choose to practice and compete on a national level find that the moves and styles come natural to them. It is really a part of who we are as a people,” Richards expressed.

Among top performers at the national finals was St. Elizabeth's Middle Quarters Primary, Class One, whose Gerreh item electrified audiences and judges alike. The students, aged 6 years and under, came away with a national title and were among top scorers in their respective class. Their teachers Eugenie Williams and Thailia Williamson were recognized as outstanding teachers and awarded accordingly.

The 2019 National Festival of the Performing Arts is sponsored by the CHASE Fund, the Kingston and St. Andrew Municipal Corporation (KSAMC), Digicel Foundation, Excelsior, MultiCare Foundation, Happi Ice and Popeyes.