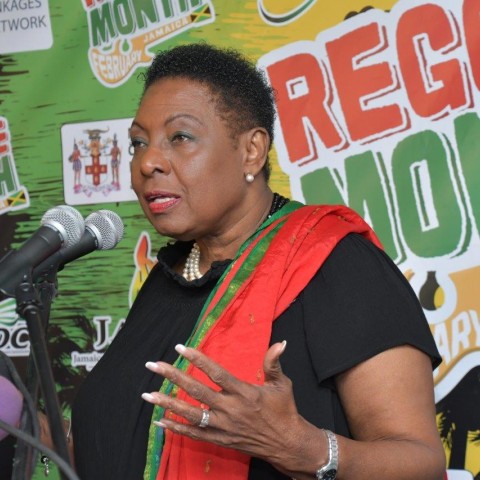 Kingston, Jamaica: The Ministry of Culture Gender Entertainment and Sport will be hosting multiple tribute and celebratory events for Reggae icons both living and dead throughout the month of February.

This was announced by Minister Honourable Olivia Grange at the launch of Reggae Month at the Ribbiz Ocean Lounge, Victoria Pier on Sunday, July 20.

Minister Grange not only launched the month long schedule of activities which will span the length and breadth of the island, but made special mention of various Reggae Month events being organized by the Government of Jamaica in celebration of Reggae’s most notable icons.

She continued: “While the Reggae Month 2019 calendar is packed with independent events endorsed by the Government of Jamaica, there are two major events that we will be producing that will honour our Reggae greats.

The Reggae Gold Reception and Awards Ceremony will honour 50 Reggae icons for the work they have contributed to both the legacy of Reggae and the world while the Dennis Brown Tribute Concert will display the best of Reggae music from not only those who were an integral part of Reggae's inception but also upcoming artistes who are teeming with raw talent."

The Dennis Brown Tribute Concert is slated for Sunday, February 24, while the Reggae Gold Reception and Awards Ceremony will be on Wednesday, February 27.

According to Acting Principal Director for Culture in the Ministry, Gillian McDaniel, the month’s line up also includes endorsed events of note which are being sponsored by the Government of Jamaica to honour and assist Reggae artistes who are still living and in need of aid.

"There are three particular benefit concerts that we are endorsing and want to bring attention to during the month. These are the Rise Up Benefit Concert, the Junior Byles Benefit concert and Di Real Feluke concert series. These three are paid concerts with proceeds going towards supporting artistes that are ailing. The Ministry has a sponsorship and artiste wellbeing programme and we provide facilitation support to this and other events. These three benefit concerts are deliberately being staged during Reggae Month to take advantage of the time confluence of other reggae-related activities," McDaniel said.

The Reggae Month Launch was attended by well-known Reggae artistes and esteemed guests from all walks of life, who expressed their optimism and appreciation for the upcoming events aimed at preserving and honoring the Jamaican art form and its impact on Jamaica, both cultural and economic.

The comprehensive list of Reggae Month 2019 activities can be found on the MCGES website, www.mcges.gov.jm and at www.reggaemonthja.com.