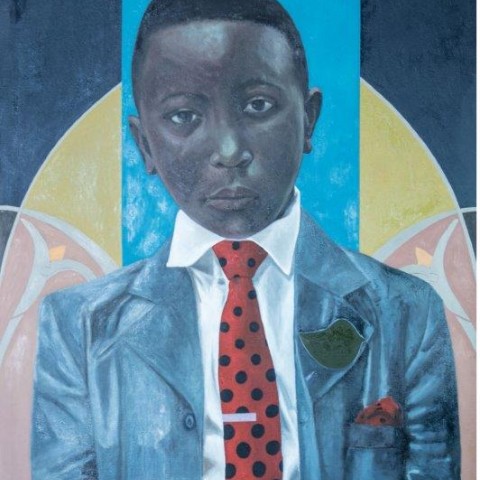 This exhibition, which will run from Monday, March 25 – Monday, April 22, 2019, is courtesy of a grant from TDC 20 St(art)ups by the Dean Collection, an art collective founded by producer, rapper and art collector Kasseem “Swizz Beats” Dean and his wife Alicia Keys.

“I seek to challenge the degrading stereotypes and misconceptions that exist about blackness, in favour of depictions of strength, power and dominance,” said Beckford, who is a winner of multiple medals and awards, such as the Prime Minister’s National Youth Award for Excellence in Arts and Culture in 2011 and the Dawn Scott Memorial Award from the National Gallery of Jamaica’s Biennial in 2014.

Beckford is also a standout entrant in the JCDC’s Jamaica Visual Arts Competition and Exhibition, taking home three bronze medals in 2005, two certificates of merit in the same year, and four silver medals in 2006, among other accolades. He also represented Jamaica at the UNESCO Art Camp in Andorra, Spain in 2010, courtesy of the JCDC and UNESCO.

‘Black excellence’ is a theme ever prevalent in Beckford’s work. Since his days competing in the Jamaica Visual Arts Competition and Exhibition, he has made it a priority to showcase what he describes as “Black presence” and “Black dominance”. Such themes can be identified in his works throughout the years.

The Hon. Olivia ‘Babsy’ Grange, Minister of Culture, Gender, Entertainment, and Sport, will be the guest speaker at this Sunday’s launch, which will also see  performances by Janine Jkul and the Leviticus Band.