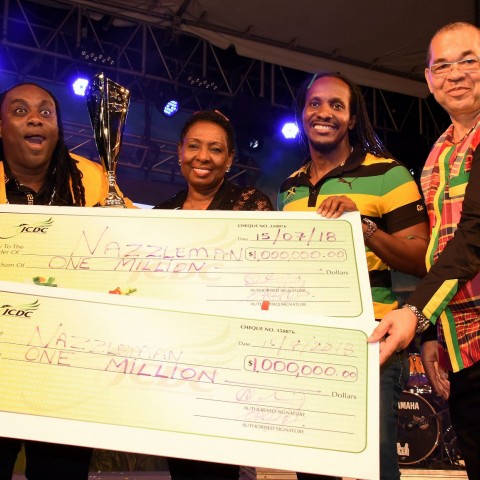 Kingston, Jamaica:  The Jamaica Festival Song Competition promised to be Bigger and Better for the 2018 staging and bumper crowd at the July 15 Grand Final at the Ranny Williams Entertainment Centre coupled with the back to back energy-filled performances which had the audience up out of their seats for most of the show proved that the Competition had delivered on their promise.

The Escarpment Road New Testament Church of God (ERNTCOG) Choir were the other winners in the Competition as the 63 member mass choir walked away with the other two sectional prizes Best Performer which has a cash award of $300 000 and Most Popular on Social Media with a $200 000 cash prize.

In addition, all of the finalists also received a cash award of $150 000 each for participation, in keeping with the Bigger and Better prize purse for 2018.

The exuberant winner, Nazzle Man is no stranger to the Jamaica Festival Song Competition as he not only won the title at the competition’s last staging in 2016 with his son No Weh like Jamaica, but he was also previously a two-time finalist, placing third in the 2012 and second in 2015.

“The 2018 Festival Song journey has been an exciting one and the Grand final was even Grander than I expected. We promised a Bigger and Better Competition this year and the finalists, participants and audiences right across the island agree that 2018 definitely delivered,” said Minister of Culture, Gender, Entertainment and Sport, Olivia Grange.

“All of the finalists’ Festival Songs are winners and and each had the audience sinning and cheering along, but at the end of the day, I agree with the judges, Jamaica A Wi Home is the perfect song to be the background for the Jamaica 56 Independence Festival,” Minister Grange continued.