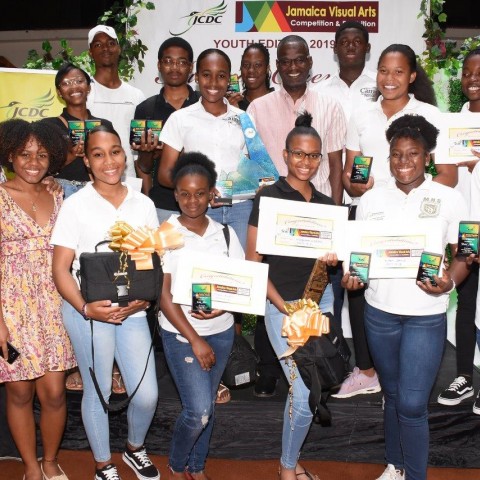 The national exhibition, which was launched during the competition’s annual award ceremony on Sunday, November 24, will be open to the public with free admission until Friday, January 31, 2020.

Organised by the Jamaica Cultural Development Commission (JCDC), an agency of the Ministry of Culture, Gender, Entertainment and Sport, the Exhibition features the award-winning works of artists as young as six (6) years in seven categories namely: Painting, Drawing, Printmaking, Collage, Textiles & Fibre Arts, Photography and Sculpture/Assemblage.

“This year’s show is a wonderful imaginative journey into over 200 works from 126 Youth artists aged 6-18 years. The show is not only distinctive this year because it’s our first Youth only exhibition in 55 years but also because this year’s entrants achieved a marvelous feat – medal awards have exceeded the number of merits by one award,” Said Sana Rose-Savage, Visual Arts Development Specialist at the JCDC.

“Normally merits are much greater in number in comparison to medals but this year the medal awards are on par and we believe, set to surpass merits in a few years, which is one of our goals.  This year’s medal-winning entries are 50.25% of the total awards or said another way, we have 102 medal awards to 101 merit awards.  This points to the high quality work being done by students and teachers!” Rose-Savage continued.

The Summit Award for best overall group, valued at over $250 000 was also presented to the group that received the richest award tally for their entered pieces, the Manchester High Film Club. While the film club’s teacher Mr. Milton Williams received the award for Top Teacher. This the second time that both the Manchester High Film Club and Mr. Williams are receiving these awards.

The final prize to be awarded, Viewers’ Vote Prize will see public voting take place on JCDC’s Facebook page between November 24, 2019 and January 31, 2020. The artwork with the most votes will receive a Tablet and a trophy after the close of the show.

Rose Savage also noted that prior to 2005, the JCDC hosted two separate competitions namely, the National Fine Arts and the National Photography Competitions. In 2005, a restructuring effort merged the two Competitions, which was forged deeper through a historic collaboration with the National Gallery of Jamaica (NGJ) to jointly host the annual event in 2007- 2012.  Currently, the Competition invites participation from artists of all ages but showcases each group – adult and youth – separately as biennial events.

The Jamaica Visual Arts Competition and Exhibition has been unearthing, developing and showcasing the creative talents of Jamaicans from all walks of life, giving them a platform for expression and contribution to the development of the local art industry. Some of the noted and respected talents who have participated in the competition include Osmond Watson, Dr. David Boxer, Colin Garland, George Rodney, Christopher Gonzalez, Cecil Cooper, Alexander Cooper, Norma Rodney Harrack, Fitz Harack, Maria la Yacona, Howard Moo Young, Donnette Zacca, Errol Harvey, Owen Minott and Dr. Warren Robinson.